To understand gum surgery (periodontal surgery) it is very important to learn about gum diseases.

Plaque and tartar accumulate at the base of the teeth gradually causing infection and inflammation. Inflammation causes a pocket to develop between the gums and the teeth, which keeps on filling with plaque and tartar. Soft tissue swelling traps the plaque in the pocket. Continued inflammation eventually causes destruction of the tissues and bone surrounding the tooth, thus loosening the tooth. Eventually it leads to loss of teeth. 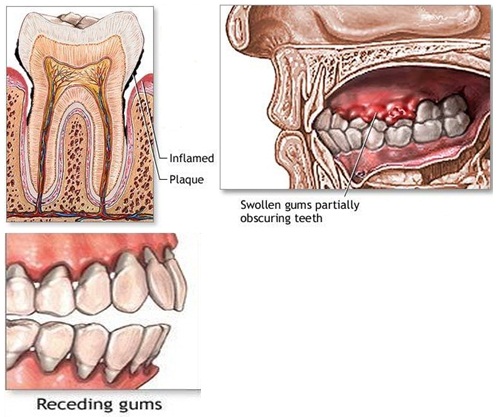 Common symptoms to identify inflammation of gums are:

Therefore to treat Periodontitis & Gingivitis, the first step is to do a thorough scaling and root planning. If this fails then a flap surgery is performed.

Before the procedure, the area to be treated is injected with local anesthesia. The gums are separated from the tooth to clean the root of the teeth filled with tartar and also repair the bone, if needed. The gum flaps are then sutured back into place and covered with gauze to stop bleeding.

Typically it takes only a few days to recover from a flap procedure. A few days after the procedure, your dentist will remove the stitches.

A gum (gingival) graft is used to replace missing and / or receded gum tissue. There are 2 types of Gm tissues. One which supports the tooth by surrounding it and second which lines the floor of the mouth and the cheek line.

Gum grafts are needed when the gums surrounding the tooth have receded exposing the root of the tooth also leading to bone loss. The purpose of gum grafting is to minimize and/or arrest the progression of recession of gums and prevention of further bone loss.

Sometimes Gum Grafting is also done to improve the aesthetic appearance of the gums. Deficient Gum Tissues in certain areas can lead to an unaesthetic appearance. Therefore Gum grafts plum up the deficient gums resulting in gum symmetry.